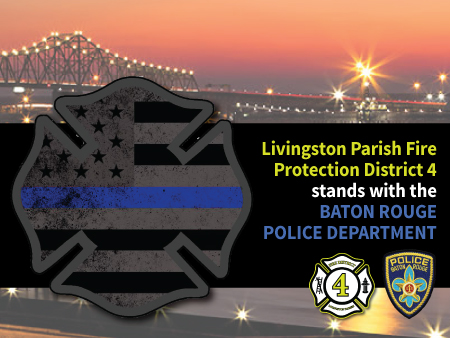 Livingston Parish Fire Protection District Four expresses sincere condolences to the East Baton Rouge Parish Sheriff’s Office, the Baton Rouge Police Department, and the families of three officers who were slain and three others who were shot, Sunday, July 17.

The shooter was killed by law enforcement officers who responded to the scene and returned fire.

“Our department is shocked by the violence against law enforcement personnel in Baton Rouge,” said Livingston Parish Fire Protection District Four Chief James Wascom.  “Firefighters and police officers share a dangerous profession, and when one department suffers a loss we all share in the grief and sorrow.  Our prayers are with the families of those who lost their lives as well as those who were injured.  In addition, we continue to pray for both departments and the safety of all law enforcement officers and firefighters as they perform their duties.”

Louisiana Governor John Bel Edwards addressed local and national media Sunday saying the shootings “do not represent the people of Baton Rouge, the state of Louisiana, or what’s best about our country.”  He continued by stating “there is no place for more violence.  It doesn’t address any injustice, perceived or real.  Instead, continued violence is an injustice in and of itself.”